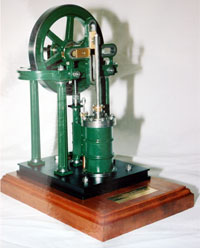 The cross engine uses an unusual arrangement to convert reciprocating to rotary motion, called a rectilinear motion. An engine using this motion was patented by James Booth in 1843, and a model of his engine is available from our collection.

This model uses the same motion but with a much simpler detail design. It is based on another model in the collection of a friend of mine, through unfortunately there is no indication of the period it was built and who make it.

It is difficult in words to describe the motion, but in essence the cross acts a guide frame for two crossheads (sliders), one moves vertically and the other horizontally. The end of the piston rod is connected to the vertical slider, joining the two sliders together is a link which has three equally spaced holes in it, same pitch as the crank throw. The crankpin is connected to the centre hole, as the sliders move up and down across; the centre hole of the link drags the crank around.

I followed the original concept of the model but drastically altered the details. Following as much as possible the full size engine details of the 1840s period I think it looks a good representation of how such an engine would have looked like at that period.

Also supplied is a full set of 23 drawings all of A4 size and both metric and imperial dimensions are shown on the drawings.

The model's flywheel is only 138mm (5 7/16") diameter so well within the usual model engineers lathe capacity. The model stands about 300mm (12") high on its wooden base.

The engine was serialised in Engineering in Miniature from ? To ?. The drawings, castings and laser cut parts are available.